skip to main | skip to sidebar

You’ve heard the investment commentators berate investments in the U.S. stock market lately. They note that the Dow Jones Industrial average, which measures values in the stock market, has been trading over 14,000 for the past month -- but isn’t that where it peaked in September of 2007? 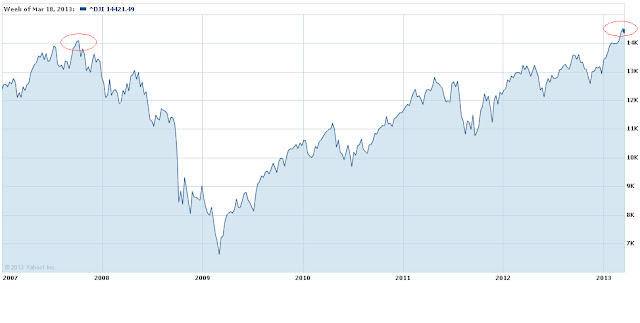 Their conclusion is that it’s folly to invest your money in the stock market since it’s had a zero return over the past five years. Other indexes measuring the U.S. stock markets, such as the S&P 500, have confirmed this 'lagging' performance.

This conclusion demonstrates the hazard of relying on 'static' analyses, which are based on exogenous factors such as comparing the beginning and end of a chart. I suggest that a dynamic analysis, based on endogenous factors, more accurately assesses the impact from an individual investor's perspective. This endogenous viewpoint takes human behavior into account.

Over the past five years, we have advised our clients to continue buying stocks (or mutual funds) every month. This strategy is called "dollar cost averaging" (DCA). By using this strategy consistently, instead of trying to time the market, an investor automatically takes advantage of down markets since investing the same amount every month enables them to purchase more shares.

When the market eventually turns around, the investor's portfolio carries stocks with a lower cost overall. The chart below compares the amount which would be saved by an investor stashing his investment in cash (under the mattress or in a money market paying virtually zero yield) to the value of the portfolio invested in diversified stocks such as mutual funds. It assumes the investor regularly invests $1,000 per month over the 64 month period (approximately 5 years) beginning in October, 2007 and ending in February, 2013, with dividends reinvested.*

Rather than ending up with $64,000, the investor using DCA ends up with $88,500, or 35% more than a static analysis would suggest. This works out to a return of approximately 7% per year, rather than a zero return.

* Data is based on closing prices of DIA, which is like a mutual fund that has all 30 of its stocks in the Dow Industrial Average. 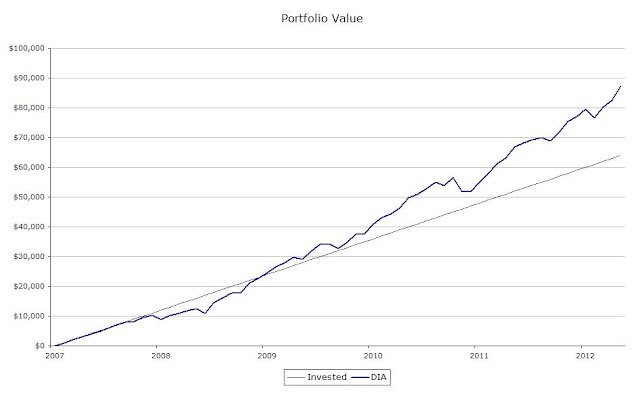 I want to thank Al Hoefer, my technical consultant, and Laura Webber, my executive assistant, for their assistance in preparing these charts and proofreading this document.﻿

Posted by Bert Whitehead at 7:23 AM No comments: